Support spindles (also called supported spindles) are spun on a surface, often in a wooden or ceramic bowl specifically designed for that purpose.  With the spindle supported, the spin can be more carefully controlled and the weight of the spindle is not as big of a factor compared to a drop spindle. Support spindles also tend to work better than drop spindles for spinning fine yarns and/or those with short staples. Although different types of support spindles are best suited to different spinning styles and weights of yarn, in skilled hands any type of spindle can be used to produce nearly any type of yarn.

Woodland Woodworking spindles are high precision tools. A great deal of care is taken to ensure the shafts are perfectly straight and they all feature a fine flicking tip for fast spinning. Spindles with separate whorls are balanced internally (i.e. there are no visible balancing pins) with weights as small as 0.01 oz to ensure a smooth, wobble-free spin. 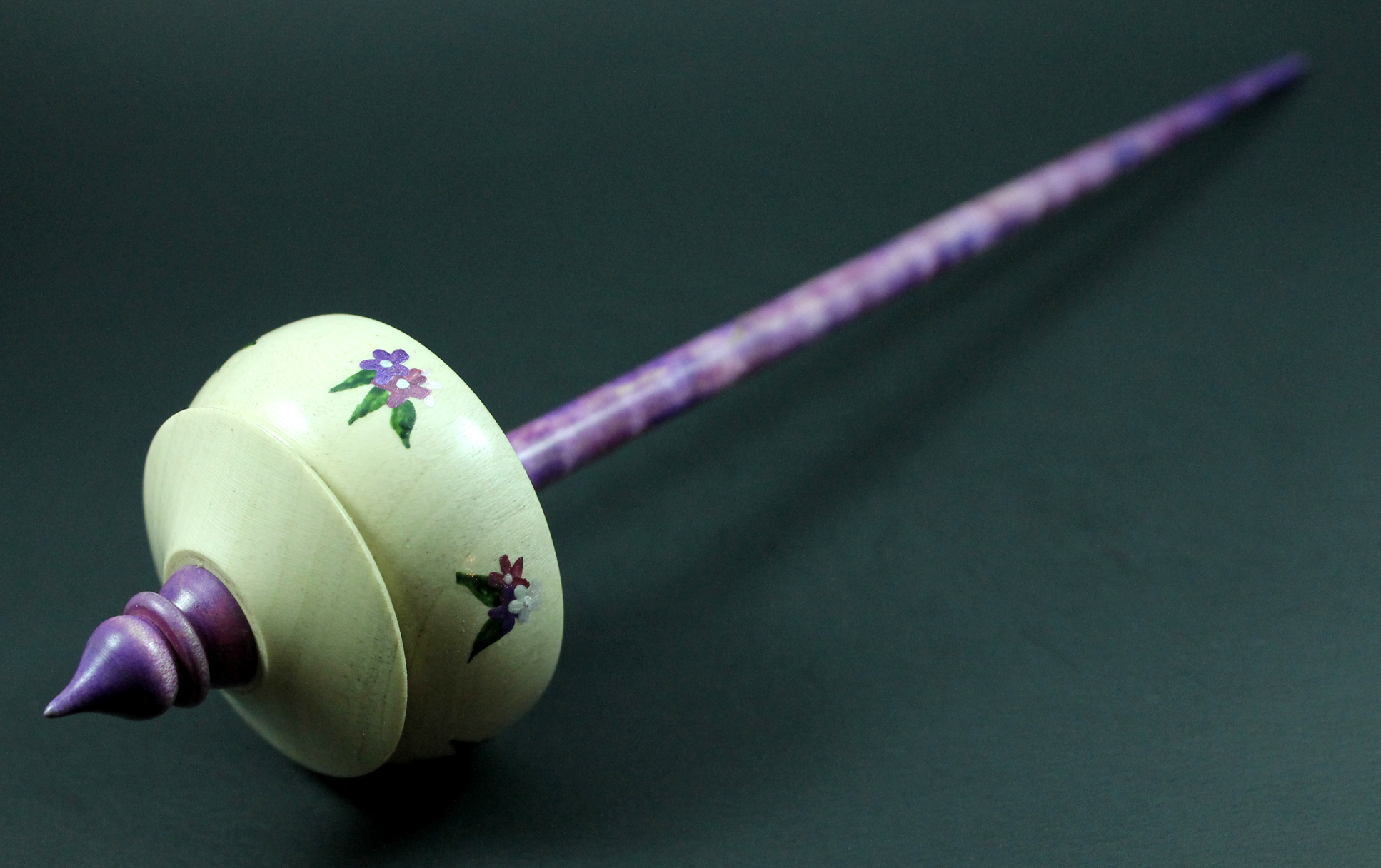 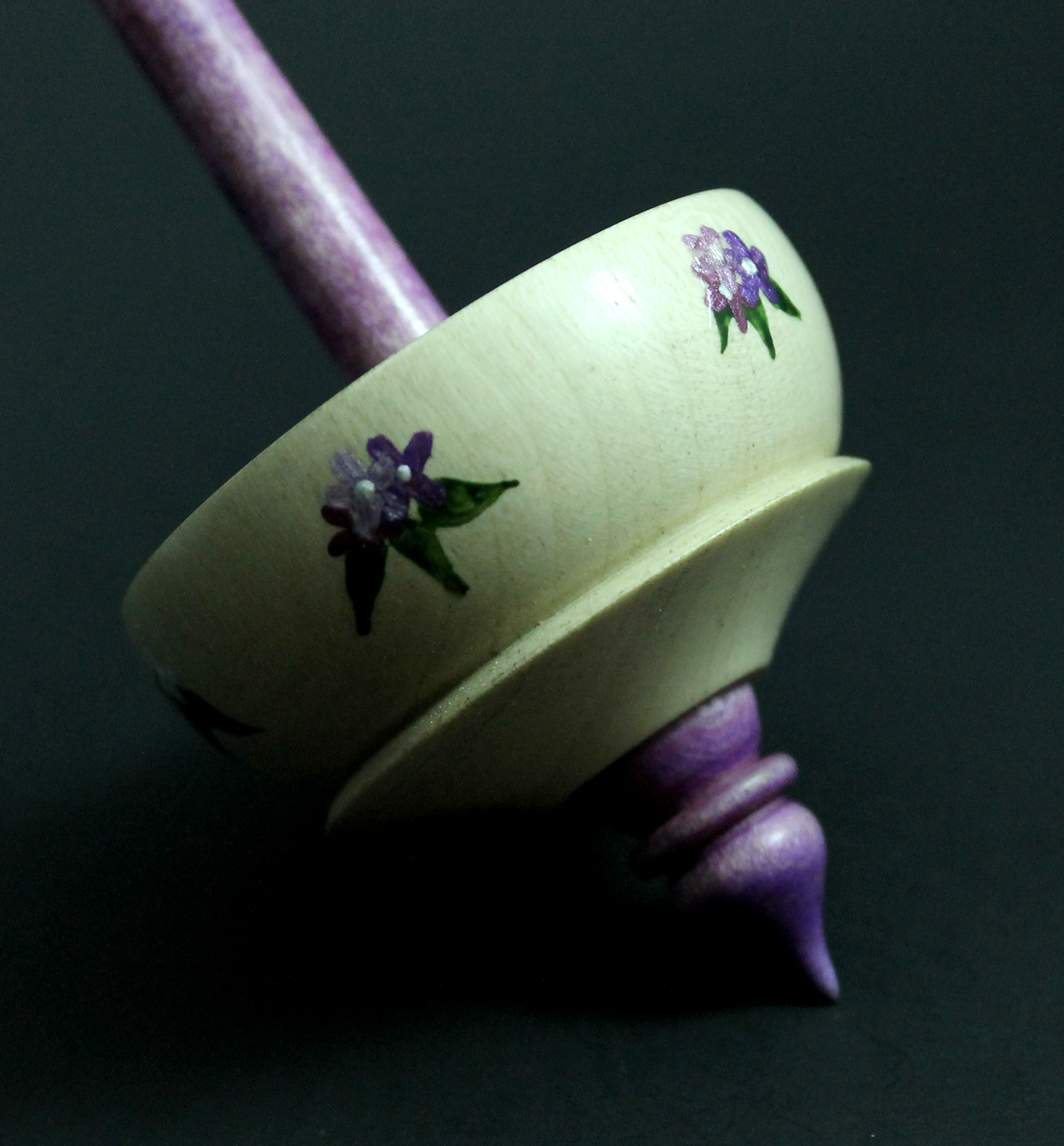 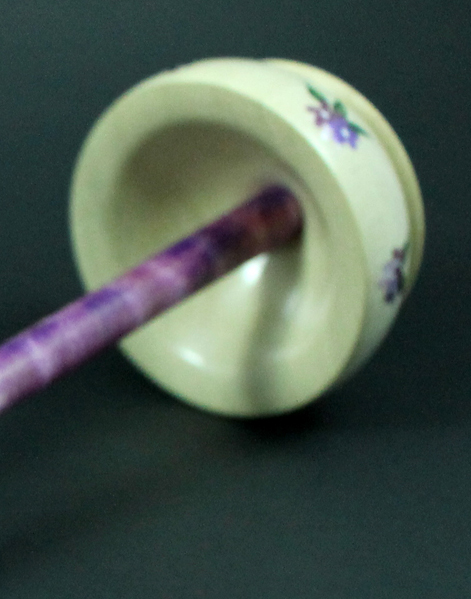 The Tibetan style spindle is our longest-spinning variety of support spindle.  These spindles are typically between 0.75 and 1.5 oz (20 to 40 grams) depending on the wood(s) used and customer preference, and typically have spin times in excess of 45 seconds.  The whorls are between 1 5/8" and 2" in diameter and are hollowed out to distribute the mass as much as possible away from the shaft for a long spin time.  The shaft is relatively thin, which helps to increase the whorl to shaft weight ratio and improve spin time, and it has a thin flicking tip, which provides a relatively fast spin.  These spindles are available with custom painted or burned designs.

The spinning characteristics of these spindles are essentially the opposite of the Tibetan style spindle.  They spin very fast and can produce a lot of twist in a short period of time, but the spin time is not nearly as long - generally between 5 and 20 seconds depending on the diameter and weight.  These spindles are typically between 0.4 and 1.5 oz (10 to 40 grams) depending on the wood(s) used. 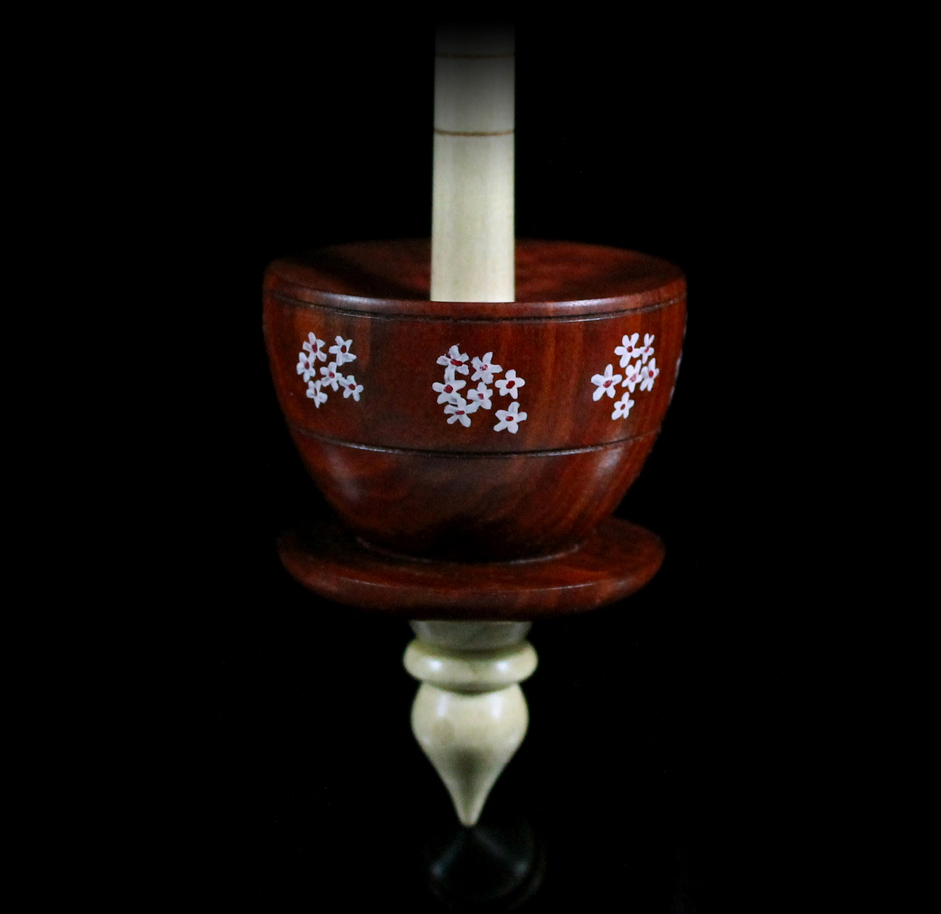 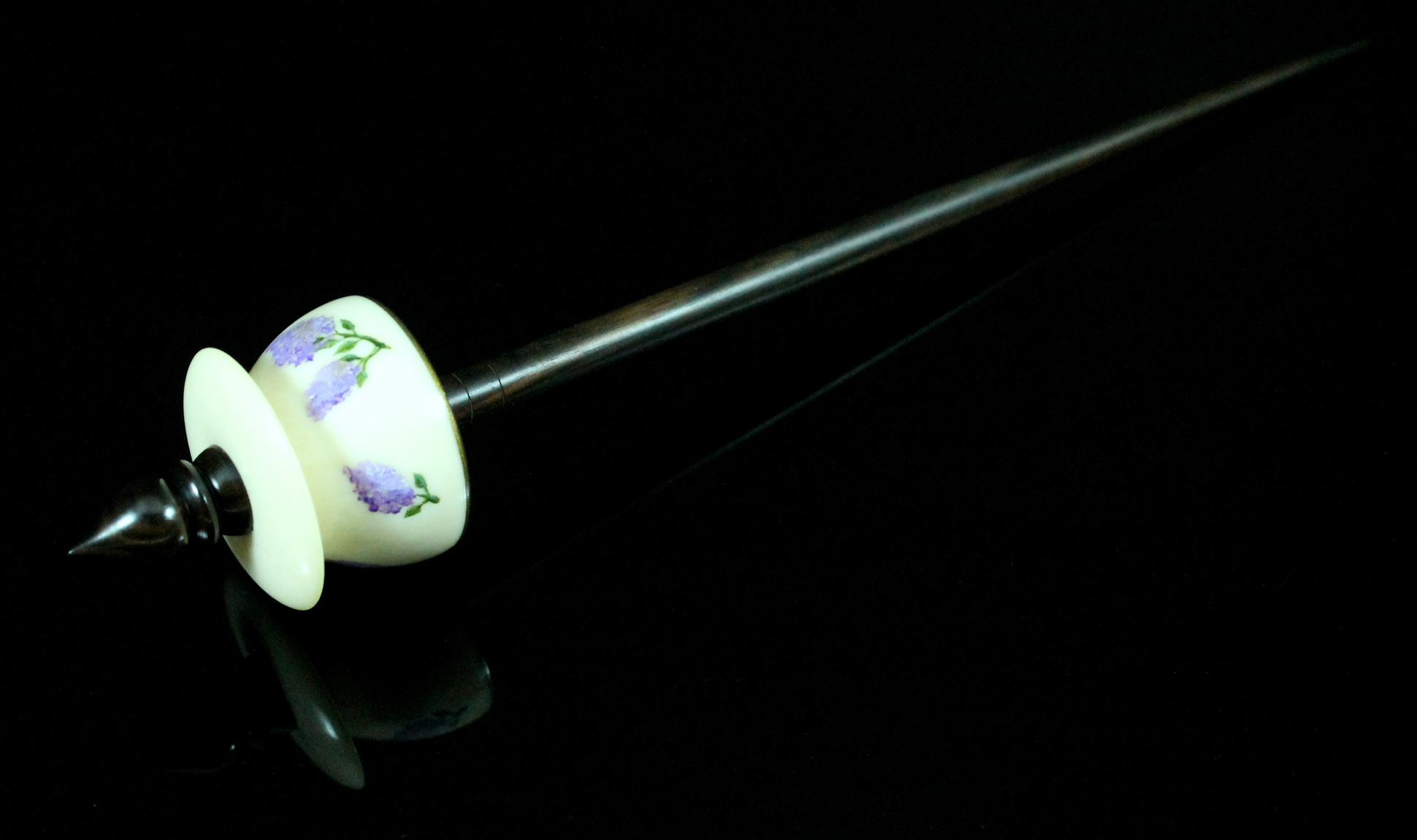 The Teacup was designed to have the ideal combination of spin time and speed.  Named for the whorl's appearance of a tea cup nested in its saucer, the Teacup is a lightweight hybrid support spindle designed for those who find most Tibetan style spindles too heavy or difficult to flick, but prefer a longer spin time than found in a typical Russian style spindle.  The slender shaft and rim-weighted whorl produce an agile spindle with an effortless yet sustained spin appropriate for a wide variety of spinning styles and fibers.  These spindles are generally between 0.5 and 1.25 oz (15 to 38 grams) and spin times are typically between 20 and 45 seconds.  Whorls are around 1 1/2" in diameter and are available with designs painted onto or burned into them, and are also available in "specialty" woods such as burls without an embellished design. Teacups with whorls made from denser woods have more hollowed out whorls to keep the weight down and will typically have longer spin times than Teacups with whorls made from less dense woods due to increased rim weighting.


Cauldron spindles are a variation on the Teacup design and have similar spinning characteristics. 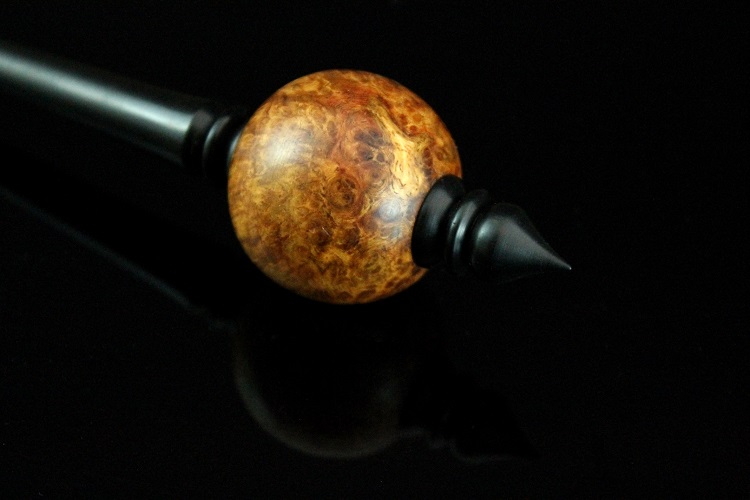 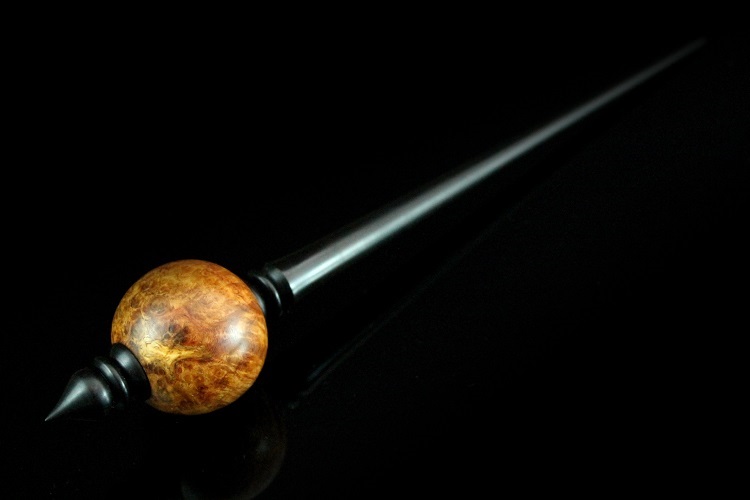 Bead spindles spin similarly to the Teacups, but with a little shorter spin time (typically between 15 and 30 seconds).  Burls are often used for the whorl, as the spherical shape is ideal for displaying the spectacular figure in these woods.  These spindles are generally between 0.75 and 1.5 oz (20 to 40 grams). Who says phangs need to be plain or have a fat flicking tip? Our phangs have the same spin feel as a traditional phang but a more ornate profile. They also have the same fine flicking tip as our other spindles for a nice, fast spin. Spin time is typically between 10 to 20 seconds and weight is between approximately 1 and 2 oz depending on the wood used.

The Dewdrop is essentially a cross between a Russian style spindle and a phang, and is aptly named for its resemblance to a dew drop.  The spin time is longer than the Russian style spindle (typically 10 to 20 seconds), but the spinning speed is not quite as fast.  Also, the large "head" gives it a different feel than the other spindles.  These spindles are typically between 0.75 and 1.5 oz (20 to 40 grams) depending on the wood used.  A lower density wood is recommended to keep the spindle lightweight and easy to flick.


Our top whorl drop spindles are designed to provide a fast, long, and balanced spin. In contrast to support spindles, it is more important to use a drop spindle of an appropriate weight. If too light of a spindle is used to produce thicker yarn, it may have insufficient momentum to achieve a sustained spin or properly twist the fiber, and too heavy of a spindle can break thinner yarn. Heavier drop spindles are also sometimes preferred for plying. Our drop spindles are typically between 0.75 and 2 oz (20 to 55 grams) depending on the wood(s) used. Here are some of the features of these spindles: 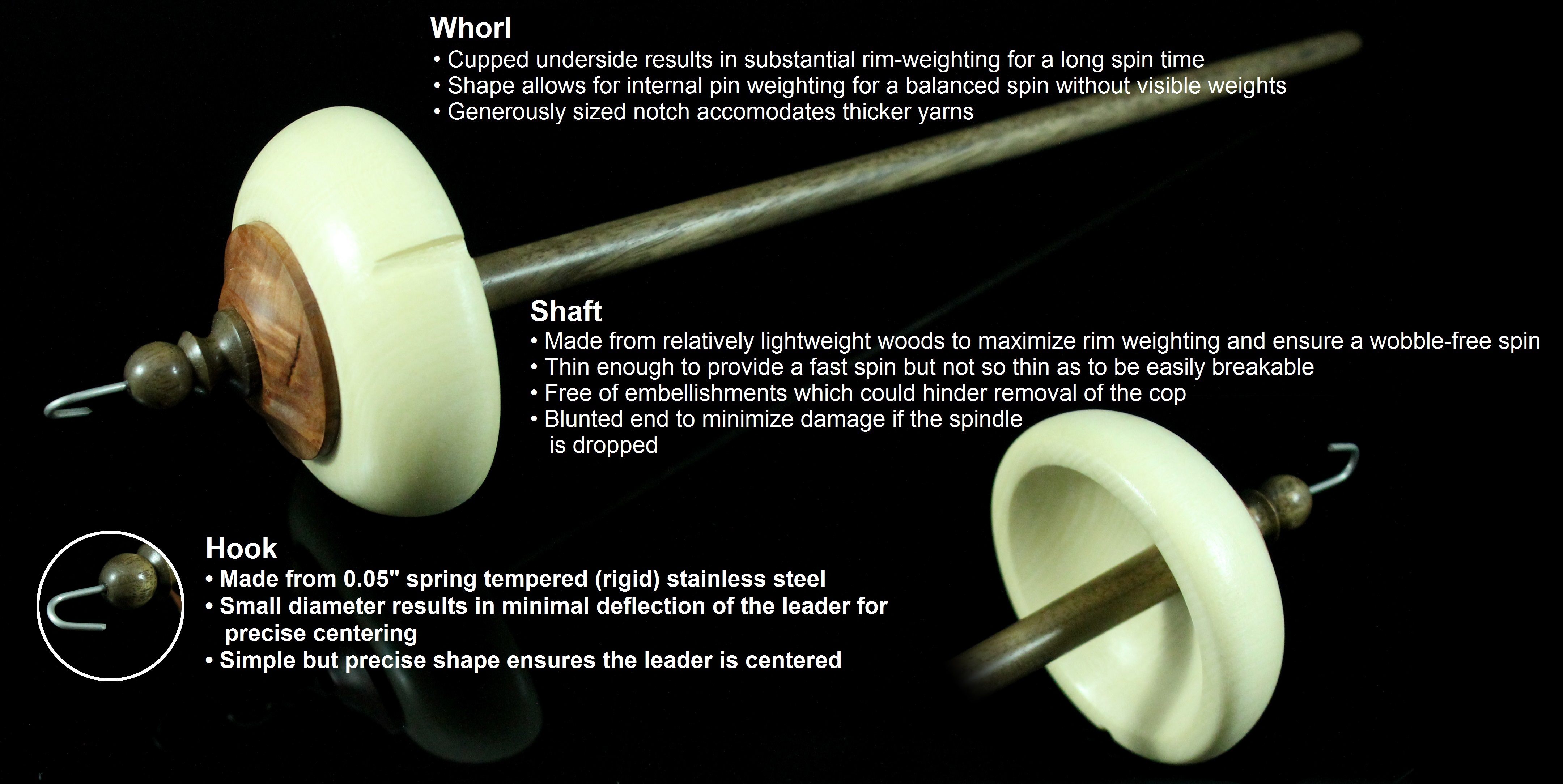